The fatal shooting of Chris Kaba has shaken and outraged people across our communities. It is devastating to see yet another Black person’s life taken by the police, however not surprising, since we are more than twice as likely to die during or following police contact. Only three months ago, Oladeji Adeyemi Omishore died after being tasered by the police on Chelsea Bridge. With each death, our community experiences collective grief. Black people across the UK are left wondering: who’s next? And how can justice and accountability be achieved? Thousands turned out to show solidarity and support to the Kaba family at a protest last weekend. This action followed the launch of a homicide investigation by the Independent Office for Police Conduct (IOPC) into Chris Kaba’s death. We welcome this swift response, however, we know that the journey for answers can span years and for many justice is rarely an outcome.

In this moment, we must resist sceptics’ demands for a ‘perfect victim’ – an impossible standard that cannot be met. Conversations surrounding Kaba’s death have already been tainted with hearsay and speculation around his personal history – what he might have done to ‘deserve’ it. Let us be clear: we believe that no one deserves death at the hands of the state. It is also impossible to discern fact from fiction when we know that both the Met and the media have historically colluded in slandering Black victims in death, for example, when they claimed that Mark Duggan ‘came from a gangster family’, and cropped photos of him at his baby’s grave to make him look more ‘threatening’. It is clear that the game is rigged – and so we must resist the demand to prove each victims’ innocence, when we have decades’ worth of evidence that the police and criminal justice system is guilty of institutional racism.

Now is the time for action – we should be turning out to show solidarity with Kaba’s family and all those organising against racist policing. The family is currently raising funds for their campaign for justice, since these campaigns are often costly, traumatic, and entail taking unpaid time off work. We want to encourage people to make a donation, large or small, to help them cover these costs. We are currently providing material support and will announce the details soon. For regular updates about the family campaign, upcoming protests and any other relevant information to the case, we recommend following @JusticeForChrisKaba on Instagram. We send our endless support, solidarity and healing to the Kaba family and to all impacted by police and state violence.

BLACK LIVES Matter UK announced that it will be giving £600,000 from its £1.2million raised via GoFundMe after last summer’s protests to grassroots groups focusing on helping the black community.

Following the announcement, The Voice sat down – on zoom, of course – with Director of BLM UK Alex Wanjiku Kelbert and spokesperson for BLM Lorna Mulungushi to hear more about BLM UK, find out who is behind it, how they decided to distribute the money, and their plans for the future. For more, check out The Voice’s Sophie Huskisson’s full interview: ‘We are really lucky to be living in this moment’: An exclusive interview with the people behind Black Lives Matter UK.

UFFC is a grassroots movement for and led by the friends and families of people whose loved ones have died at the hands of police, prisons, mental health institutions and borders. The organisation was founded by Black women, and continues to be led by Black women, although they do work with anyone whose loved one has died at the hands of the state.

UFFC is the only organisation specifically named as a partner group on our GoFundMe page as we believe them to be one of the leading groups challenging racist state violence in Britain. We therefore a working with them to run a large project for justice.

This Peoples Tribunal will hear cases in which the state must be brought to account for taking the lives of Black and other oppressed people. You can learn more about the Peoples Tribunal in this Guardian exclusive by Aamna Mohdin: BLM UK to fund ‘people’s tribunal’ for deaths in custody.

Black Lives Matter UK (BLMUK) announces that it is releasing £600,000 in funding to grassroots groups working for Black communities.

These funds constitute 50% of the money the volunteer-led organisation crowdfunded via GoFundMe over the summer of 2020.

The money will be awarded in two phases – the first set of funds have now been distributed. This first round has seen just over £169,500 given in small grants to organisations BLMUK has worked with over the last five years. For more information, check out Nadine White’s Exclusive in the Huffington Post: Revealed: Who Will Get First Black Lives Matter UK Grants After £1m Fundraiser, or check out our Fund page.

Join us as we speak to an expert panel about policing in the black community.

This event provides an opportunity to examine the impact and role of policing in the black community, plus discuss some of the reforms that may help improve the situation.

Please register for the event here

1) Dr. Leroy Logan MBE; Former Superintendent of the Metropolitan Police; Author of ‘Closing Ranks, My Life as a Cop

4) Mr. Lee Lawrence, Chair of the Cherry Groce Foundation and Author of ‘The Louder I will Sing’

Can the police be reformed?

From Mohamud, to @freesiyanda, to Stephen Lawrence, to George Floyd, to #EndSARS, and to the countless more innocent Black lives, the police have continuously shown themselves to be institutionally racist, violent, and ineffective.

Until now, the mainstream argument in response to blatant police racism has been reform. More body cams, more unconscious bias training – but does this actually work? Year after year of more funding, more training, the disproportionate levels of stop and searches, tasering, and deaths in custody remain. Do we then need a more radical solution? Do we need to defund and abolish the police? 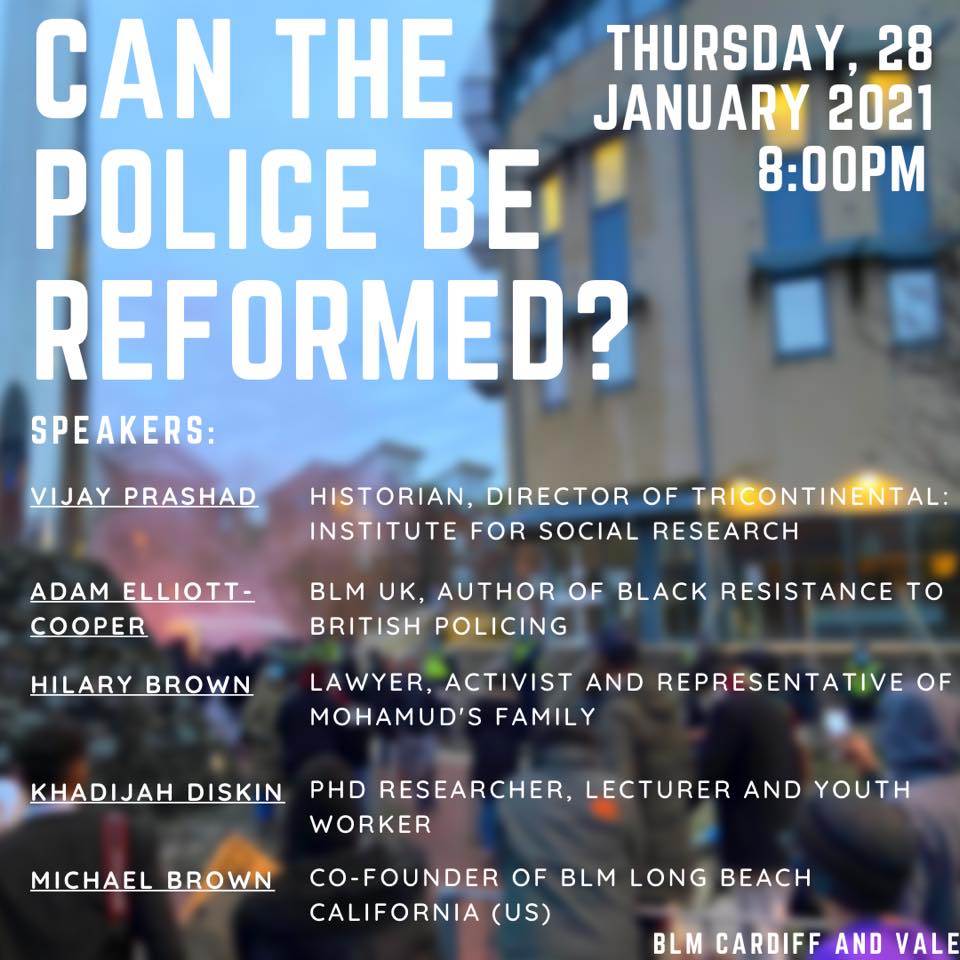 UKBLM announces that more than £100,000 will be released in January to black-led organisations across country. Read the coverage in The Guardian.

BLMUK speak at Clubhouse Room with BLM Cardiff, Justice 4 Black Lives and the family of Mohamud Mohammed Hassan
Mohamud Mohammed Hassan was a young black man who died after sustaining serious injuries in police custody on Saturday 9th January 2021. Mobilisations protesting his death in Cardiff and London were shut down by police, with many being arrested and fined for breaking lockdown regulations. Learn more about the campaign on their petition page.

What Issues Do You Face If You’re Young, Black and British?
A panel of black artists, influencers and activists, including BLMUK’s Joshua Virasami, discuss issues facing young, Black, Britons today. You can listen back to the show on the 1xtra website.

How To Change It Make a Difference. #2 in the Series: Merky How To series. UKBLM’s Joshua Virasami sets out several lessons for successful campaigning, drawing on the experience and actions of a number of activist and political movements. You can check out the book here.